Breaking Silos: Converting a Library Into a Research Commons

Space flexibility was one of the key project goals for the Research Commons in the 18th Avenue Library at Ohio State University in Columbus.

What type of academic space encourages students from different disciplines to brainstorm, study and innovate in one another’s company? This was the question put to team members who worked on the new Research Commons in the 18th Avenue Library at Ohio State University in Columbus. The goal was to create a highly flexible environment capable of leveraging the latest technology while fostering discovery, education and innovation.

The resulting design was the product of a collaborative planning process that involved the newly formed Research Commons staff, researchers, the architect, and technology consultants. At workshops, project stakeholders and the design team developed the project vision and key goals through the use of discussions, pin-ups, and key word grouping. These brainstorming sessions enabled the team to establish a vision and articulate five underlying goals for the project.

A little more than a year since opening, the Research Commons is exceeding its operational goals. Five driving principles set the stage for construction and enabled the design team to create the ideal space, systems and technology:

The Research Commons in use

The Research Commons sought to look beyond the usual disciplinary silos and create an environment that works for everyone. Starting with a tight budget-one third of which had to be spent on technology-the project could have ended up simply as a place to house and use technology. But because of the collaboration it invites through thoughtful design, the space has turned out to be much more.

“Today, the flexibility of our space has helped us to think creatively about the ongoing evolution of our services in new and exciting directions that address emerging needs around campus,” says Joshua Sadvari, Research Commons Program Manager and Geographic Information Systems (GIS) Specialist for OSU.

GIS Day 2016, held in the Research Commons, illustrated the design’s potential. A hands-on workshop in the computer lab was followed by a series of lightning talks in the colloquia space. Then, attendees moved into the brainstorming spaces to see exhibits of maps and to talk with GIS professionals from around campus.

“We had over 100 attendees throughout the day from across campus and from the local community,” says Sadvari, “and we were able to do so many different things because of the variety of spaces available to us.” 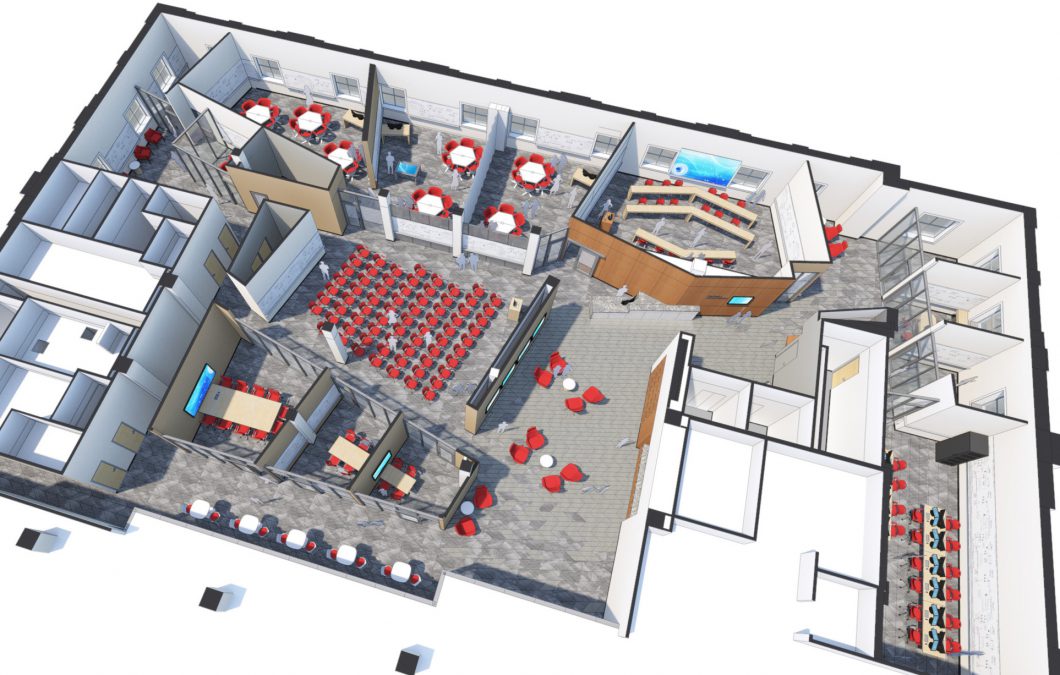 An overview of flexible spaces in the 18th Avenue Library Research Commons at the Ohio State University.

Another notable event was the Narrative Medicine/Disability Studies CoLABoratory held in January 2017. Despite no direct involvement of Research Commons staff in organizing the event, it exhibited the high-tech capabilities of the facility and demonstrated the Research Commons usefulness to other campus groups.

The CoLABoratory was held in the Colloquia space, where presentations were delivered on the main projection screen. Meanwhile, two monitors on either side of the main screen were hosting content from different individuals who had wirelessly connected to them from different spots in the room.

One captured comments and ideas from the group throughout the day so that everyone saw a running list of discussion topics for the brainstorming session. The other allowed a Disability Services staff member to transcribe the presentations in real time for deaf and hard-of-hearing attendees.

“We received tremendous feedback from the event organizers about the flexibility and technology that contributed to the success of their event,” Sadvari says.

Feedback gathered from users has been positive. For example, the 2016 spring semester included 23 education and training programs attended by about 500 researchers from across all user levels and from more than 120 different departments and campus units. During that time, 1,445 transactions were recorded from the Research Commons concierge desk (88 percent directional, 12 percent basic reference).

“It is very fulfilling to see the ways graduate students are recognizing the Research Commons as a unique space for their work,” Sadvari says, “and our staff is truly invested in supporting them and making a positive impact in their success as researchers at Ohio State and beyond.”

As an increasing number of libraries are being remodeled, it is clear that they are evolving to adapt to the needs of students, instructors, administrators, and the community. Real estate inside a library-once limited to books-is taking a backseat to meeting and studying space. The Research Commons at the 18th Avenue Library is an example of how collaboration, established goals, and a defined plan can create a campus space that encourages interdisciplinary discovery and innovation. 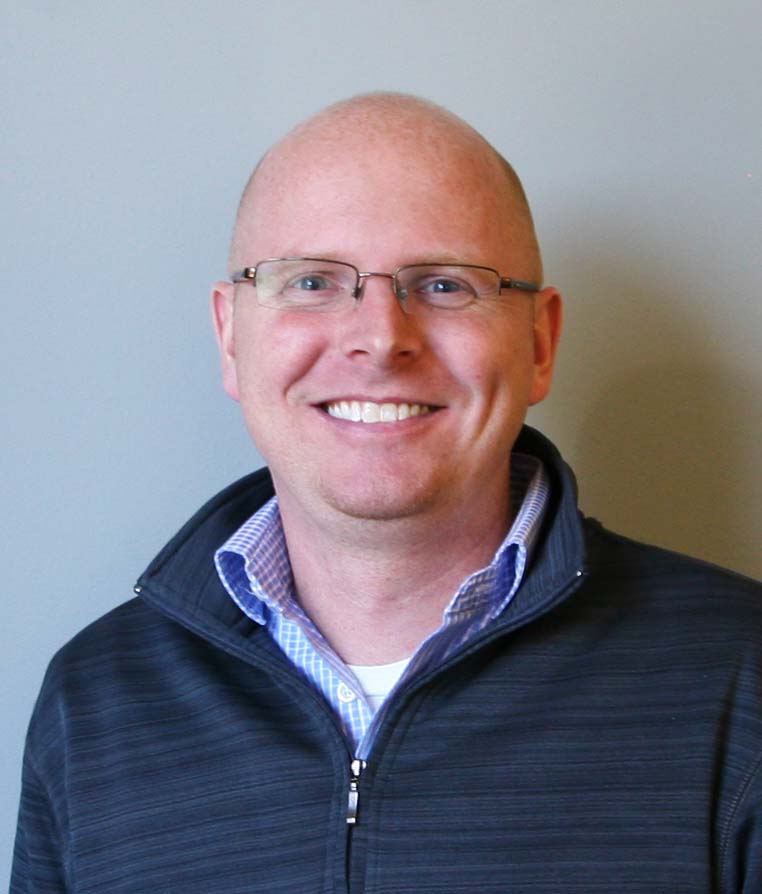 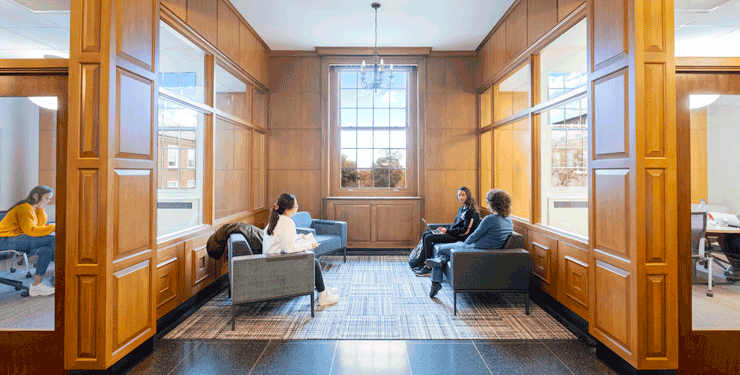 Published Articles University Library Research Results: What You Don’t Know Might Hurt You 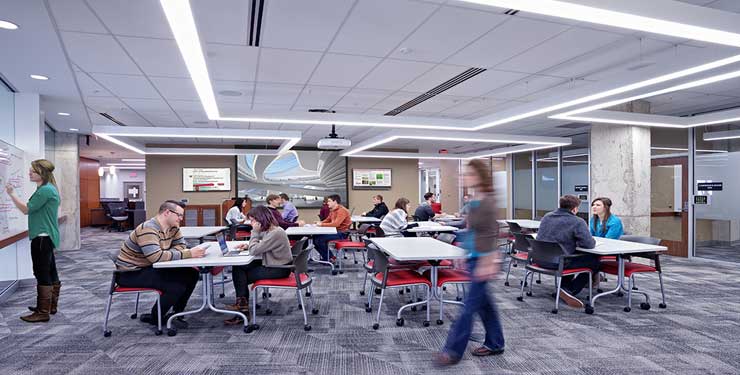 Published Articles University Library Research Results: What You Don’t Know Might Hurt You

With 12 years in the architecture industry, Mike’s experience on a wide range of projects within higher education enables him to successfully lead projects from the programming and planning phases through construction. His strong design and communication skills and a partnering approach lead to great experiences for his clients. He also has direct experience serving as a project manager on multiple simultaneous and fast-track projects in the university setting.